While not technically my Christmas present, just before Christmas The TechShop was running a Groupon for a month’s membership plus several hours of classes for a reasonable price. Heidi was almost as excited on my behalf as I was so I bought the membership and just before my time off from work began, I took my first class...

So the other day a friend asked me to take a look at their non-responsive PC. Pretty soon I figured out that the power supply was not living up to its name and like most other power supplies had a big fat sticker on it that said "No Serviceable Parts Inside". Well, that may be good for maintaining warranties, but it wasn't very helpful now so I promptly sliced across it and opened the case anyway.

I'm sure you can see where this is going. My eye was immediately drawn to a half dozen capacitors with peaked or cracked tops. So then I had to ask myself, if these were blown what were the chances that other parts were damaged at the same time? Could fixing the thing really be as simple as replacing a handful of parts? That was a question that I just couldn't ignore, so I headed off to radio shack and forked over the $8 for 5 1mF capacitors. Painfully because I knew good an well I could pick them up for 10 cents each from somewhere like [Tayda Electronics](http://www.taydaelectronics.com/servlet/StoreFront) but they'd take a couple weeks to show up.

So with a little difficulty since my 30W soldering iron doesn't quite have enough oomph to melt the industrial solder they used (and possibly heat resistant by design since it's going to live inside a hot power supply), I was able to get the bad ones out and the new ones crammed in. After reassembly, I broke out the multi-meter and shorted the correct switch pins and what do you know, the fans spun up! According to the multi-meter it was now putting out the correct voltage. Amazing!

Of course, the story isn't all rosy. Despite the presumably functioning power supply, the motherboard would still not give a whisper of life. I poured over it looking for more blown capacitors with no luck. So other things must have been damaged at the same time, and those things are harder to spot. Still, a quick look at some of the old motherboards in my pack rat boxes found several with the tell tale peaked tops. These used some serious solder which I was barely able to dent so no complete success stories yet. But soon enough I'll strike a deal on a new soldering iron and perhaps have some spare motherboards around. For what ever that's worth. Image courtesy of The Falafel

So I've been on a major electronics kick lately. Major in that I've been really excited about it. Not so major in what I actually know so far. But in the midst of my [Hackaday](http://hackaday.com/) and EEVBlog reading I came across an episode where Dave blows up some capacitors. This combined with the activity to... 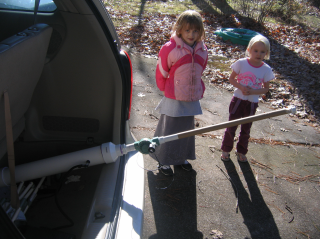 For Christmas this year, I was given a copy of Backyard Ballistics. Now all of the information in the book is widely discussed on the internet but there is value in having it pulled together in one place. And, with a genuine vacation from work, I was determined to make use of the information immediately since I knew I wouldn’t...

The biggest project (or program for you project managers out there) that has occupied my time over the past five years is fixing up the fixer-upper we bought in Nov 2000. All in all I’ve got to say I’m pretty happy with the way it has turned out. There are certainly some things I look at and wish they had been done a little differently, but I can’t tell if other people look at them...